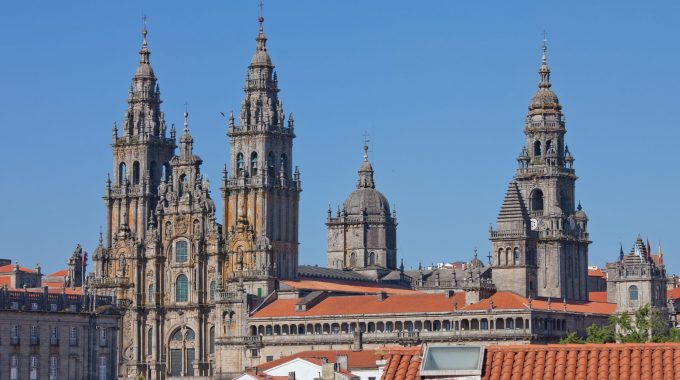 El Camino de Santiago is probably the most popular pilgrimage for Roman Catholic believers. Each year, hundreds of thousands of people walk along the Way to reach Santiago de Compostela. But does the capital of Galicia have anything to tell us about the early phases of Christianity in Spain?

In order to answer this question, we will visit the cathedral of Santiago de Compostela for the second stage of this miniseries focusing on Spain. This is a cathedral which was built in the twelfth century. Through time, several transformations made its architecture a unique mixture of Romanesque, Gothic and Baroque styles. The last part to be erected was the main entry of the church called Fachada do Obradoiro (façade of the goldsmith) in Galician. It was built in the Baroque style in the eighteenth century. Throughout the year, many pilgrims enter through this door for the final steps of their pilgrimage.

So how did Santiago de Compostela become one of the most famous pilgrimage sites in the world? And what can we learn about the origins of Christianity in Spain? These are questions that have bred much controversy among scholars through the centuries, right up to this day. But first of all, let’s talk about the accounts that made Santiago de Compostela a place of pilgrimage.

Until the sixteenth century, it was widely believed that the Apostle James, the son of Zebedee, had evangelised the Iberian Peninsula. Even though the accounts may sometimes differ, James may indeed have preached in the city of Zaragoza before moving westward until Galicia. At the end of his ministry in Spain, James is reported to have left nine disciples before returning to Israel. There he was arrested and beheaded by Herod in Jerusalem. After his death, the accounts say that his body was brought to Compostela and buried on the site of the current cathedral.

With time the exact location of his burial site was forgotten. Then, in the eight century, a hermit was supernaturally led to discover what he believed to be the body of the apostle in the town of Compostela. The news spread rapidly and soon king Alfonso II of Asturias became the first pilgrim to visit the tomb. During the following centuries, James’ burial site became the most popular pilgrimage destination of mediaeval Europe, until the Reformation in the sixteenth century.

Opinions concerning these accounts differ not only between Roman Catholic and Protestant scholars, but even among the Roman Catholics themselves.

The Roman Catholic historian, Johann Baptist Alzog, was one of the most prominent people who believed that James visited Spain. In his work Historia Eclesiástica de España, this nineteenth century historian claimed that several early scholars confirmed the accounts. One was Isidore, the seventh century bishop of Sevilla and another was Didymus the Blind, master of Saint Jerome, in the fourth century. Alzog believed that scepticism regarding James’ ministry in Spain had been stirred up by the sixteenth century archbishop of Toledo, García Loaysa y Girón. He claimed that this was done to decrease the influence of the Archdiocese of Santiago in favour of Toledo. The core issue, according to Alzog, was about which archdiocese would have the supremacy over the Roman Catholic Church in Spain.

There are several objections to the accounts of James evangelising Spain. Let me mention two of them. Firstly, according to the tradition of the early church, James stayed in Jerusalem until his martyrdom in 44 AD. Secondly, in his Epistle to the Romans, Paul states that he doesn’t want to build upon another’s man foundation, and only a few verses later, that he intends to visit Spain (Romans 15:20,23-24). This seems to imply that no apostle would have visited Spain before Paul.

So why should we talk about James in this stage if it is not certain that he preached the Gospel in Spain?

Even if the accounts are contested, the belief that James was buried in Santiago de Compostela transformed the city into one of the main centres of Spanish Christianity in mediaeval times. Since Christianity taught people to care for the poor, the strong Christian presence in Santiago brought several positive changes to the city and turned it into a flourishing place.

Firstly, the Hostal dos Reis Católicos (the hostel of the Catholic kings) was founded near the cathedral in 1486. This hostel, funded by king Ferdinand and queen Isabel of Spain after their pilgrimage to Santiago, became a place where rich and poor alike could stay. The hostel eventually became a hospital that cared for the sick of the city. Later on one of the first medical schools of Spain was created here, which thus provided doctors for the sick even beyond the city.

Secondly, the Benedictine monastery of the city founded a grammar school in 1495. The objective of the monks was to provide education for the poor. Very quickly the school attracted many students. Some decades later, it evolved into a university which became one of the most prominent Spanish centres of learning during the Renaissance.

We might never know whether the accounts of James in Spain are true or not. But one thing remains undeniable: the truth of the Gospel has borne much fruit in Santiago de Compostela.