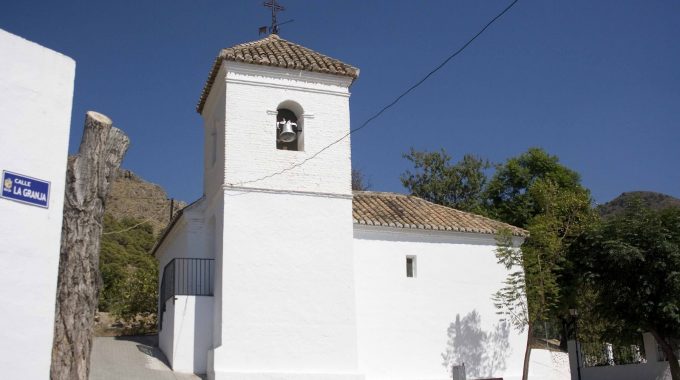 The presence of church buildings in Andalusia may seem normal. After all, Spain is strongly Roman Catholic. And yet, the history of this region reveals that a Christian presence can’t be taken for granted.

For the third stage of a miniseries focusing on Spain, we will go to a village near the Mediterranean sea called Castala. It is located in Andalusia, on the Southern slopes of the mountain range Sierra Nevada. Castala is part of the municipality of Berja, 80 km West from the city of Almeria.

To reach Castala from the town of Berja, we need to follow a road that climbs for five kilometres towards the Sierra de Gádor. After the village, a tiny road continues until it reaches a small white church overlooking the Berja valley called Ermita de San Tesifón (hermitage of Saint Ctesiphon).

This beautiful church stands as a double testimony to two different eras of the Andalusian history. The first account has to do with the arrival of Christianity in the region while the second is linked to the so-called Reconquista, when the Muslim occupation of Spain was brought to an end.

If we enter the church, we discover a statue in honour of Ctesiphon, the man this church is named after. But who was he and what was his influence in this region?

Ctesiphon is believed to be the first Christian missionary to reach the region of Berja in the second half of the first century. But before we explore his life in more detail, we first need to take a look at first century Spain. In our two previous stages, we discovered that Paul and James might have been the first Christian missionaries in the peninsula. But if they came, it is very likely that their ministries focused on the Northern part of the country. What seems to prove this is that there are numerous traditions and churches named after Paul and James in the North while such traces are rarer in the South. So how did the Gospel reach the Southern part of the country?

According to one theory, after his mission to Spain, the apostle Paul may have returned to Rome and told Peter about the need to reach this region. As a result, the two apostles would have sent seven missionaries to the region that was then a Roman province named Hispania Baetica. These missionaries became known as the Seven Apostolic Men. Their names were Torquatus, Caecilius, Euphrasius, Indaletius, Hesychius, Secundius and the man whose traces are found in Castala, that is Ctesiphon.

So what do we know about Ctesiphon? Not very much actually, only that he came to evangelise the Roman town of Vergi (today Berja), and resided outside the town, here in Castala. And Roman Catholic tradition adds that he was the founder of the diocese of Vergi.

Obviously the scarcity of information makes historical research about Ctesiphon rather difficult. Nevertheless, there is a fascinating discovery that confirms the existence of a Christian community here in the first century. In Alcaudique, nowadays a suburb of Berja, coins, crosses and sarcophagus dating back to the same era of Ctesiphon were found. These objects are currently conserved in the National Archaeological Museum in Madrid.

Let’s now explore the second account related to the church of Castala.

As I said in the beginning, the presence of a church in the mountains of Andalusia can’t be taken for granted. And here is why…

In the eighth century, Muslims from North Africa invaded Spain. While Muslim rule over the entire Iberian peninsula lasted only for a few decades, Andalusia remained under their control for nearly eight hundred years. And actually, the region of Almeria was one of the last to be conquered by the Spanish army during the Reconquista in 1489. Under Muslim rule, the church was persecuted. The bishopric of Vergi was suppressed in 711, and very little is known about whether a Christian community survived here or not.

The Reconquista may have freed the area from Muslim control but it did not establish peace immediately. In fact, the area remained politically and religiously unstable for a full century following the Reconquista. The king of Spain forced the Andalusian Muslims to convert to Roman Catholicism. The Muslims in turn tried to regain control. This situation resulted in the destruction of Berja, in the death of many people and left the city almost depopulated. Some years later, several hermits came to re-establish a Christian presence in Berja and thus also contributed to its reconstruction.

From a modern perspective, this episode of history can seem controversial. Nevertheless, the hermitage of Saint Ctesiphon, built several decades after the arrival of the hermits in Berja, has helped the region to recover the vital memory of how the Gospel came here in the first place. It also stands as a reminder that the Christian presence in Andalusia is not something to be taken for granted.