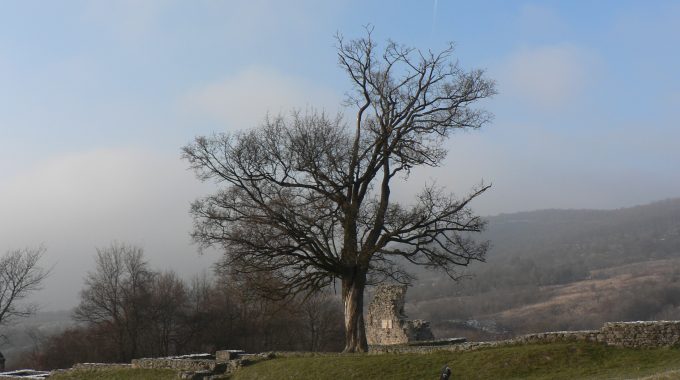 Many cities and villages of Europe developed around monasteries. However, these Christian communities drew their inspiration from other people who had envisioned to live alone in remote areas. These people are generally known as the Desert Fathers.

To discover more about the Desert Fathers, we will visit a Hungarian village called Pilisszentlélek. It is located in a beautiful hilly area covered with forests, at forty kilometres North from the capital Budapest. We are also twelve kilometres away from the closest city, Esztergom, which borders Slovakia at the shores of the Danube River.

The name Pilisszentlélek sounds very complicated. The main reason is that the Hungarian language is – like Finnish, Estonian or Basque – an agglutinative language, meaning that words are formed from several other words put together. For example, Pilisszentlélek is made of pilis, which means tonsure, and Szentlélek, which means Holy Spirit. The words ‘tonsure’ – referring to the haircut of a monk – and ‘Holy Spirit’ suggest that we will be visiting a monastery here.[1]

To find out where the monastery is, we will take a small road from the village down a valley and up a hill towards the north. Less than a kilometre along the way, we discover a wooden cross and the ruins of a monastery behind it.

This ancient monastery is actually connected to the Desert Father whose life we will explore today, that is Paul the Hermit. But before we look into the link between him and this Hungarian monastery, let’s first talk about Paul’s life.

Paul the Hermit, also called Paul of Thebes, was born in Egypt around 225, that is nearly 25 years before Anthony, another Desert Father that we discussed in our last stage. If Anthony is considered to be the father of cenobitic monasticism, Paul is the father of anchorite monasticism. The word ‘anchorite’ refers to the Christians who left their homes and towns to live a life centred on God, alone and in remote areas.

All we know about the life of Paul comes from one manuscript written by the Church Father Jerome just a few decades after his death, called The Life of Saint Paul the First Hermit. In 250, when persecution was raging against the Christians, Paul’s brother-in-law plotted to betray him. Having discovered his plans, Paul fled to the Theban desert and found refuge in a cave near a spring and a palm tree. The cave, the spring and the palm tree provided everything he needed: food, drink, clothing (palm leaves) and lodging. Initially, Paul might have thought that this place would be a temporary refuge, but with time, it became his permanent residence until his death nine decades later.

Paul’s life would have probably been forgotten in history if God had not decided otherwise.

In 343, when Anthony was already a well-known figure in the Roman Empire, God showed him a dream where he discovered the existence of Paul as well as the location of his cave. Consequently, Anthony paid Paul a short visit, after which he returned to his monastery. Later on, he returned to visit Paul again but only found his corpse. Anthony buried him and took his tunic made of palm leaves for himself, which he later wore on special occasions such as Easter and Pentecost.

So what is the link between the ancient monastery of Pilisszentlélek and Paul the Hermit?

Thanks to the writings of Jerome, Paul the Hermit became a source of inspiration for many mediaeval Europeans. For instance, in the 13thcentury, several Hungarians came to live in the forests of this area. Soon, their lives began to impact a priest in Esztergom called Eusebius, who later on obtained permission to retire from office and became a hermit himself in 1246.

Four years later, Eusebius received a vision from God where he was summoned to gather all the hermits in the area and plant a monastic community. In obedience to his vision, Eusebius founded the monastery of Pilisszentlélek. A decade later, the community received temporary approval from Pope Urban IV and finally, half a century later, a legate of Pope Clement V arrived from Rome to grant full approval.

Soon the monastery gave birth to other communities in Hungary and the new group of monasteries was named the Order of Saint Paul the First Hermit. The order continued to spread beyond the borders of Hungary throughout Europe and peaked at 170 monasteries. Sadly, the increasing secularisation of European culture in recent centuries has also had an effect on the order. Nevertheless, nearly seventy Pauline monasteries can still be found around the world.

While the order is still alive today, the monastery in Pilisszentlélek is now a ruin. This is the unfortunate consequence of 150 years of Muslim Turkish occupation in Hungary during which many sites of Christian worship were destroyed. This traumatic era of Hungarian history continues to have an impact on the nation today.

Although Paul’s vision was simply to live alone with God, God has used his life as a source of inspiration for the foundation of many monasteries that have had a profound impact on our European societies.

[1]With special thanks to my Hungarian friend Peter Danku who explained to me the meaning of Pilisszentlélek.