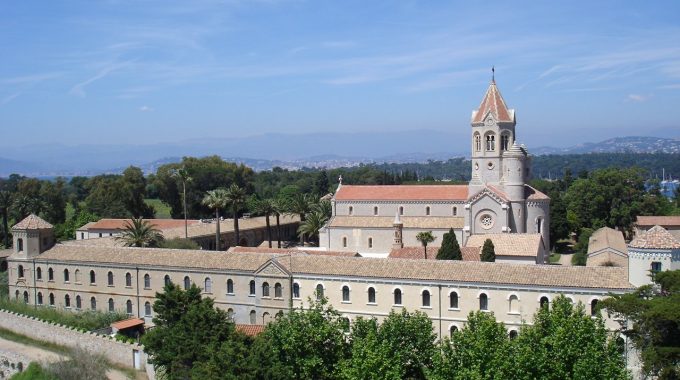 Most tourists visiting Cannes are attracted by the seaside palace, which hosts one of the world’s most famous film festival. However, just a few kilometres south from the palace lies an island that is a lot less known. And yet, this island has had a significant influence on Western history.

The island I am talking about is called Île Saint-Honorat and it is the second largest of the Lérins archipelago. Saint-Honorat is a rather flat island of 37 hectares, mainly covered with woodlands and vineyards. On the southernmost tip of the island, there is a large tower and also a fortified wall running along the coast. Behind the wall lies a monastery and a church that are now part of the Cistercian monastic movement.

The tower and the walls used to serve as a defensive bulwark against the pirates in mediaeval times. Even though the tower, built in 1073, is probably the oldest building on the island, history tells us that a monastic community was founded here a lot earlier, in the beginning of the 5thcentury.

This monastery, called Lérins Abbey, would have much to tell about the history of France and Europe as a whole. But the reason we are here is because it also stands as a reminder of the Desert Father called Pachomius. But before we look at his connection with Lérins, let’s take a look at his life.

Pachomius, also known as Pacome or Pachomius the Great, was born in the city of Thebes (modern-day Luxor), which is situated along the Nile River in Egypt, in 292. According to an early hagiography, Pachomius was enrolled in the Roman army at the age of 21, against his will. While he was conscripted in Thebes, he saw Christians bringing food and comfort to his troop. These believers inspired Pachomius to investigate Christianity and as a consequence he was soon converted to faith in Jesus Christ.

Soon after his conversion, Pachomius left the Roman army and became a disciple of a hermit called Palaemon. Seven years later, Pachomius set out to the desert and settled near Anthony the Great (stage 77) to start living as a hermit himself. As a monk, Pachomius continued to submit himself to conditions that were as harsh as what he may have experienced in the army. For example, some sources mention that he slept standing attached to a wall for fifteen years.

One day, Pachomius heard the voice of God telling him to gather all the hermits of the region and build a dwelling for them. He built this place in Tabennisis, just along the Nile and soon more than a hundred monks filled it. In fact, this place was the first place to bear the name of cenobitic monastery.

Pachomius passed away during an epidemic at the age of 58. But in spite of his rather early death, he succeeded in planting eight monasteries where several hundred monks lived.

This is where we return to Lérins Abbey. The Rule of Pachomius, which was later translated into Latin by the Church Father Jerome, began to inspire people beyond the land of Egypt. Among them was Honoratus, the son of a noble Roman family in Northern Gaul, who was born two years after the Egyptian monk died.

After Honoratus and his brother Venantius became Christians, they embarked on a journey from Marseille to visit Israel and the monasteries in Syria and Egypt. Sadly, the death of Venantius in Greece forced Honoratus to change his plans and to return to Gaul.

On his way back, Honoratus stopped in Provence where he met Leontius, the bishop of a town called Fréjus, which is situated 35 kilometres West from Cannes. His contact with the bishop led him to begin life as hermit on this deserted island of the Lérins archipelago. Soon however, several disciples began to gather around Honoratus, who thus founded the Lérins Abbey in 410.

Although it is unclear how Honoratus became acquainted with the Rule of Pachomius, he began to apply a similar rule here in Lérins. The monastery grew rapidly in importance and several renowned scholars and missionaries are known to have lived and worked here. Even St. Patrick himself is reported to have come here for training before later returning to the British Isles and becoming the Apostle of Ireland. On a negative note however, Lérins was also the monastery where a famous heresy called semi-pelagianism developed until it was condemned at the council of Orange in the sixth century.

Honoratus was not the only one to be inspired by the Rule of Pachomius. The latter was indeed a watershed in the history of monasticism. The Rule later served as a source of inspiration for many other monastic rules. The most known example of this is the Rule of Saint Benedict, which has been foundational to Roman Catholic monasticism to this day.