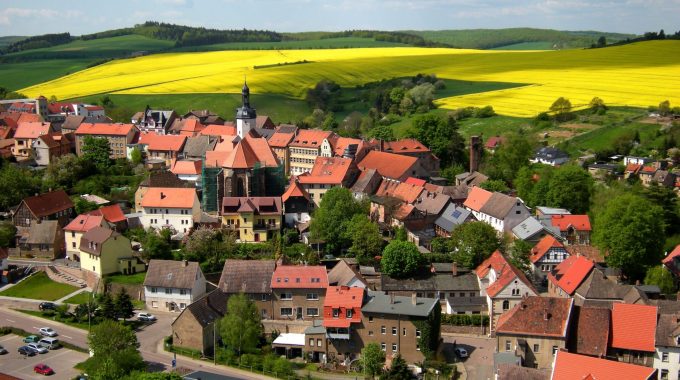 In Europe, we tend to take our social welfare system for granted. However, few know that the Protestant Reformation played a key role in its development.

As we continue following in the footsteps of Martin Luther, the location we will visit today will shed more light on this. After visiting the town of his birth Eisleben (stage 81), today we will visit Mansfeld where Martin Luther spent his childhood.

Mansfeld is a small town of nearly nine thousand inhabitants, situated 13 km from Eisleben. Among the prominent people born in this area was a German composer named Wolfgang Zeller, who is known for having made the music of the silent film Luther in 1928.

It is almost impossible not to see the name of Martin Luther somewhere in Mansfeld. For instance, the central square and the local high school are named after him. We also find a museum and a monument in his honour. Most importantly, we find the Luthers Elternhaus Original, that is the Original Childhood Home of Luther, in a street named – unsurprisingly – Lutherstrasse.

The current house was rebuilt at the end of the nineteenth century. And just as Luther’s birth house was a witness to the development of universal education in Germany, this house points to another fruit of the Reformation, charitable work. But before we explore this in more detail, a few words about Luther’s childhood years.

Hans and Margaret Luther had moved into this house when Martin was six months old. During their first years here, the family lived in extreme poverty. Soon however, Hans set up a workshop, and slowly, the business began to prosper. Hans Luther became known as a diligent and trustworthy citizen. Later on, the trust he had gained gave him the opportunity to represent his district in the city council.

Thanks to his father, Martin Luther was able to attend school from an early age, even though this was typically a privilege reserved for the wealthy. Martin was tutored by a teacher named Georg Aemilius. The training that he received followed the classical Christian curriculum. Martin thus learned to read and write in Latin, and he also learned the basics of the Christian faith, such as the Lord’s Prayer, the Apostles’ Creed and the Ten Commandments. Interestingly enough, these teachings were clearly deeply formative for him, as can be seen in the fact that he included them in his small catechism later on. This little book was then taught to all the children of the Protestant nations in Europe.

Martin Luther was a strong-willed child and because of this, he received harsh discipline from both his parents and his teacher. Later on in his life, he wrote that ‘it is right to punish children, but at the same time we must love them.’ His strong character was also the source of great hopes for his father who dreamed of his son becoming a scholar. And so, to achieve this dream, Hans sent his son to be educated at a Franciscan friary in Magdeburg when Martin turned sixteen.

Hans and Margaret Luther continued to live in Mansfeld until their death, after which, their younger son Jakob took over their property. The house remained in the family until 1578 and more than three centuries later the Mansfeld Lutherhausverein (the Luther House Association of Mansfeld) bought it in order to preserve the memory of Martin Luther in the town. After being renovated, the building became a house for deaconesses, a ministry that served under the aegis of the Lutheran Church.

But who were these deaconesses and what did they do?

The word deaconess comes from the Greek diakonos, which means servant or minister. The role of the deaconess was to offer social and medical care to the poor and the sick. This ministry drew its inspiration from the New Testament, for example from the women who served the Lord Jesus during his earthly life, or from the women in the book of Acts who served the physical needs of the church.

Even though the ministry of the deaconesses remained vibrant in the Eastern Church in the Middle Ages, Roman Catholic women had very little access to this type of ministry in Western Europe. With their emphasis on the Word of God, the reformers of the sixteenth century rediscovered the role of the deaconesses. Luther wrote that ‘women who love godliness, are inclined to have special grace, wherewith to comfort others, and relieve their pain.’ However, it is only in the nineteenth century that the ministry of deaconess became an organised body within the Lutheran churches of Northern Europe.

In the twentieth century, the activities of the deaconesses inspired the city councils of Northern European nations to develop a secular version of such services. It is not difficult to see how this inspired the development of the modern social welfare systems in those nations.

The Luthers Elternhaus Original in Mansfeld is a compelling witness to how the modern social welfare systems in Europe sprang from a movement sparked by a child of this town.