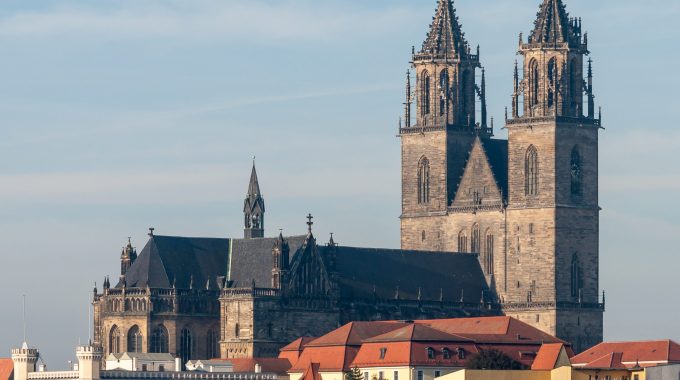 During recent centuries, Europe has undergone relentless attempts to erase the Christian roots that gave life to its civilisation. As we follow Martin Luther’s story geographically, we will discover Magdeburg, a place where this tendency is visible.

The goal of erasing the Christian heritage was particularly aggressive in the twentieth century, especially in countries under communist rule, including East Germany, where Martin Luther lived. In Magdeburg, not less than ten mediaeval churches were destroyed by the communist regime following World War II.

Nevertheless, some mediaeval buildings have miraculously survived to this day, one of them being the cathedral of Magdeburg. Located by the River Elbe, the cathedral is famous for being the resting place of Otto the Great. This tenth century German emperor built the cathedral here because it was located conveniently close to the eastern border of his realm. This was in line with his intention to expand the empire, and thus Christendom, eastward.

Otto the Great also built Magdeburg’s domschüle(cathedral school), which quickly became one of the finest centres of education in the Holy Roman Empire. Several prominent archbishops were educated here in mediaeval times. And among the most famous pupils that ever attended the domschüle was the father of the Protestant Reformation, Martin Luther.

So what brought Luther to Magdeburg?

During his childhood in Mansfeld (stage 82), it became apparent that Luther had both a great capacity to learn and a strong character. Noticing these qualities, his father began to envision that his son would become a scholar. And so, in 1496, Hans sent Martin to the domschüle of Magdeburg.

Magdeburg was the very first place where Martin Luther lived on his own, at the age of fourteen. And these times were particularly tough for him. At the time, there were no students’ funds available and his father’s business couldn’t finance his studies either. So Martin had to find ways to sustain himself – and very often he ended up begging for bread on the streets with other poor children.

Martin Luther didn’t go through these difficult times in vain, however. At the time, the domschüle was greatly influenced by the Brethren of the Common Life. This was a monastic movement that began in the Netherlands in the fourteenth century and it had a significant impact on the field of education. Among the most notable students of the Brethren was one of the greatest scholars of the sixteenth century, Erasmus of Rotterdam, whose translation of the Bible would have a great influence in Luther’s life later on.

Among Luther’s teachers in Magdeburg was Andreas Proles, an Augustinian monk who had attempted to reform the Franciscan monasteries in which he was involved. Because of his endeavours, Proles had many enemies and this even led him to be banned by a papal bull. Finally, after an appeal to the pope, the ban against Proles was revoked. As a professor, Proles continued to call for the reformation of the monasteries and the church in general. There is no doubt that Martin Luther was shaped by his message.

Very quickly, news about the difficulties Martin was facing reached his parents in Mansfeld. So less than a year later, Hans and Margaret decided to send him to another school in Eisenach, in Hans’ native region, hoping that it would be easier for Martin to sustain himself there.

Several decades later, exactly seven years after publishing his Ninety-Five Theses, Martin Luther returned to Magdeburg to preach the Gospel. This led many churches of the city to adopt the Protestant faith. And in 1567, the cathedral was finally dedicated to Protestant worship and Magdeburg became a leading centre for the Reformation.

But let’s fast forward to the twentieth century and return to my statement at the beginning. What were the reasons behind the unprecedented attempts to erase the Christian heritage of Europe? The current location of the domschüle can actually give us some clues.

In mediaeval Europe, reality was primarily understood from a Christian perspective. This meant that Europeans understood that God was unchanging, timeless, perfect and totally distinct from creation. This was the worldview that the domschüle had taught to Martin Luther.

Hegel, however, was part of a philosophical school that rejected the biblical understanding of God. Grounded in the Enlightenment and in Kant’s Existentialism, Hegel’s philosophical theories had led him to conceive that God was neither immutable nor totally distinct from creation. Instead, Hegel’s god was in constant evolution, always moving towards greater perfection.

Hegel’s ideas became foundational for philosophers such as Charles Darwin and Karl Marx. And Darwinism and Marxism later became the bedrock of political ideologies such as Nazism and Communism. These two movements brought much destruction, not only to human lives but also to the knowledge of Europe’s Christian roots.

Sadly, even after having produced so much evil, the name Hegelstraße shows that modern-day Europe continues to venerate the very philosophies that are destroying its civilisation. But what God has done in this continent can never be erased.