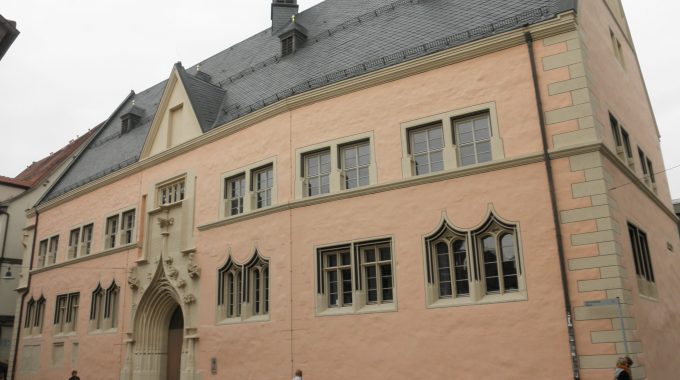 The Protestant Reformation was more than a theological dispute around the doctrine of salvation. In fact, it shook the very foundations of the mediaeval universities. Visiting the university of Erfurt, where Martin Luther studied, will help us to discover how.

As we continue walking in Martin Luther’s footsteps, we will now visit the city of Erfurt, in the region of Thuringia. Erfurt is actually a place of many beginnings. The city itself is one of the oldest settlements of the Thuringii, an ancient Germanic tribe. Also, Boniface, the Apostle of the Germans, mentioned that Erfurt was one of the first Christian dioceses of Central Germany. Moreover, the Alte Synagoge of Erfurt is Europe’s oldest synagogue.

The building we are visiting today in Erfurt is called Collegium Maius. It is located in the old town near the left bank of the Gera River. Even though the building is now the headquarters of the Protestant Church in Central Germany, its past actually points to another beginning that occurred in Erfurt. This was the location of the very first university of Germany, which was founded in 1379.

The university of Erfurt enjoys the peculiar privilege of being both the oldest and the youngest university of Germany. This is not a logical contradiction, even it sounds like one, since the university was closed in the beginning of the nineteenth century and opened again in 1994, just a few years after the demolition of the Berlin Wall.

In the sixteenth century, the university of Erfurt was the finest centre of learning in Germany. This place was therefore a natural option for Martin Luther after he graduated from high school in Eisenach (stage 84). His studies had a profound impact on the reformation and also impacted universities. But before we take a look at this, let us turn to two important events which had a great influence on Luther’s life.

The first event is linked with one of Luther’s favourite places in Erfurt, the university library where he enjoyed the vast selection of books available. One day, as he was browsing through the titles, Martin Luther discovered a Bible, which was very rare at the time. When he realised how thick the book was, he understood that the Scriptures read during the church mass couldn’t possibly represent the whole Bible.

The first pages he began to read were from the book of First Samuel, when Hannah consecrated her child Samuel and gave him to the care of Eli, the temple priest. Little did Luther know that his life would have a similar influence in Europe as that of the prophet Samuel in Israel. Quite naturally, Luther began to long for a Bible of his own, but since it was impossible, he returned to the library regularly to read it there. We can easily understand that this experience had an influence on his endeavour to translate the Bible in German and to make it available to all.

Secondly, shortly after his graduation in 1505, Martin Luther became very ill. His condition was so critical that death seemed but a step away. One day, an old priest who had followed Luther closely during his studies paid him a visit and said: ‘My dear bachelor, take courage! You will not die this time. Our God will yet make you his instrument in comforting many others. For God lays his cross upon those whom he loves, and those who bear it patiently gain much wisdom.’ Martin Luther never forgot the words of this priest, even in later years of struggle and persecution.

Let us now return to the studies of Martin Luther. Which topics did he study? And why did they become so influential for the Reformation?

Martin Luther enrolled at the faculty of philosophy in 1501. He studied the writings of scholastic philosophers such as William of Ockham, Duns Scotus, Bonaventura da Bagnoregio and Thomas Aquinas. Later in his life however, Martin Luther spoke of scholasticism as corrupted. He even made a famously harsh remark about Aristotle, whose philosophy had influenced scholasticism, saying, ‘If Aristotle had not been a man, I should be tempted to take him for the devil.’

Why was Luther so opposed to scholasticism? And why did his views regarding scholastic philosophy shake the universities of Europe?

Universities are naturally founded on philosophical presuppositions or, in other words, on a worldview. These presuppositions are like a filter through which reality is studied and measured. In Luther’s time, the dominant worldview in universities rested upon scholastic philosophy. Even though this philosophy was born in a Christian context several centuries earlier, Luther criticised the scholasticism of his time because it rested more on Aristotle’s philosophy than on the revealed Word of God. In other words, in the sixteenth century, mediaeval university studies were built on speculations about the nature of God rather than the truth of God as revealed in the Bible. This philosophy influenced all spheres of knowledge. In challenging these foundations, Luther sparked a revolution in education as a whole. The impact of this change had a ripple effect on the whole of society.

Such a change of worldview is again needed in our contemporary Western universities, most of which are resting on a worldview that excludes biblical revelation.

The Protestant Reformation was primarily a return to the Bible as the ultimate source of truth. For us today, it can be a source of inspiration to ground tomorrow’s universities in the truth of the Bible.