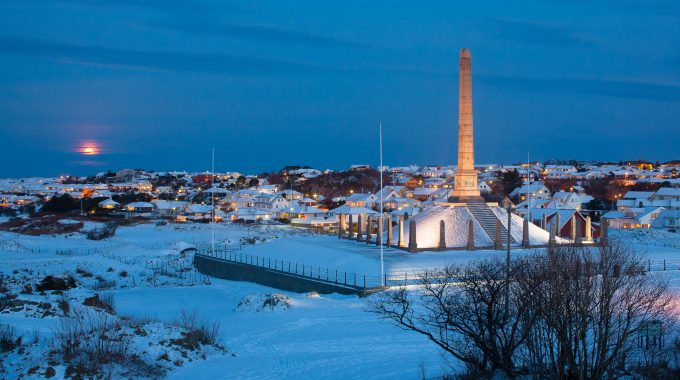 “Ja, vi elsker dette landet”, “Yes, we love this country”! This is the way the Norwegian national anthem begins. Its second verse pays tribute to king Harald who united Norway, and also unintentionally triggered the Christianisation of his people.

For the first stage of a series in which we will explore how the Gospel took root among the Norwegians, we will visit the town of Haugesund in the county of Rogaland, in South-Western Norway.

Located by the Haugesundet strait, Haugesund is a relatively recent town which began to grow in the nineteenth century. Before receiving the official status of a town in 1854, this rural area was the stage of several significant events in the history of Norway.

The place we are visiting today in Haugesund is a monument called Haraldshaugen, which is located two kilometres north from the town centre. The monument is an obelisk built on the tomb of Harald Haarfage, or Harald Fairhair, the first ruler of the unified kingdom of Norway. Haraldshaugen was inaugurated on the 18th of July 1872 for the millennium of the unification of the kingdom.

The unification of Norwaywas the conclusion of a long series of military battles in the country and marked the beginning of the reign of Harald Fairhair. But to understand how Harald influenced the Christianisation of his people, we will need to look at his life story in more detail.

Harald was the son of Halfdan, king of Vestfold, a small kingdom near modern-day Oslo. His mother was Ragnhild Sigurdsdatter, the granddaughter of the king of Jutland in Denmark. Already from his early childhood, Harald seemed to be destined to lead an influential life. This was already revealed to his mother Ragnhild in a dream, in which she saw that he would become like a tree covering Norway and the surrounding countries. History proved her dream to be accurate.

After the death of his father Harald became king of Vestfold when he was only ten years old. Later on he fell in love with Gyda, the beautiful daughter of the king of Hordaland, the region of modern-day Bergen. When he proposed to her, Gyda agreed to marry him only if he conquered the whole country. Far from being discouraged, Harald declared: “I call God, who made me, to witness that never will I have my hair cut or combed until I have conquered the whole of Norway, with skat (taxes), duties, and lordships, or die in the attempt.”

After a successful series of battles, Harald, whose hair had grown so long that he was given the nickname Haarfage (Fairhair), won his last battle at Hafrsfjord, 50 kilometres South from Haugesund. Harald thus married Gyda and became the first king of a united Norway.

Even if Harald never really converted to Christianity, it seems clear that he was acquainted with the Christian faith. His great-grandfather Harald of Jutland had been a Christian. When discussing Harald’s faith, the Saga of Harald Haarfage relates that “he believed in the God who was the strongest and had created all things and ruled all things.”

So if Harald never really converted to Christianity, why do I claim that he contributed to the Christianisation of the Norwegians? Actually, it happened in two specific ways.

The first is linked with the Viking expansion, which is the period when many Norwegians, or Norsemen as they were called at the time, migrated all over Europe. When Harald became king, his tight rule of taxation on landowners caused an increase of the emigration that had started a century earlier. In many cases the Viking expansion was violent in nature and often the invaders’ victims were Christians. But as has often been the case in Christian history, the victims actually brought their persecutors to faith in Christ.

The second way in which Harald influenced the conversion of his people was connected to the country of Norway itself. Since Harald had had many sons from several wives, he decided to share the land between the firstborn of each of his wives and make his eldest son Erik the overlord of the kingdom. But according to the sagas, Erik, who became frightfully nicknamed Blodøkse (Bloodaxe), began to eliminate all his brothers.

Later on Harald had another son from a mistress named Tora who was so tall that she was nicknamed Mosterstong, the pole of Moster, in reference to the island where she was from. Knowing the evil that Erik Blodøkse was committing in his quest for power, Harald realised that his youngest son Haakonwas in danger. Harald thus sent his child to England where he could grow safein the care of king Æthelstan. And since Æthelstan was a Christian, Haakon was baptized and raised in the Christian faith.This proved to be significant since, later on, Haakon played a decisive role in the Christianisation of Norway. This is what we will explore, God willing, in our next stage.

Yes, Norwegians love their country and so does God, the Creator of Norway. And He chose a rather unusual way to make himself known to the Norwegian people, both in Norway and abroad.