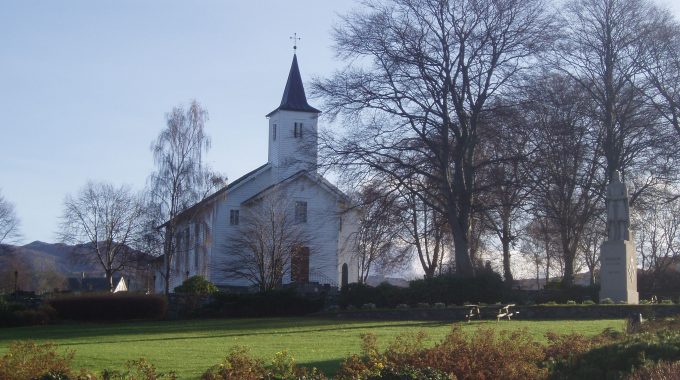 In Norway, as in many European countries, Sunday is an official day of rest. This tradition, which finds its roots in the Ten Commandments, is the result of centuries of Christian influence among the Norwegians.

As we continue to explore how the Gospel reached Norway, we will see that establishing a day of rest was not so easily accepted at first. And the location we will visit in this stage, a small town called Fitjar, will help us find out why.

Fitjar is a beautiful town on the slopes of a hill overlooking the North Sea. It is located on the island of Stord, in the county of Vestland. Between the marina and a white wooden church lies a small park named Håkonparken (Haakon’s park). In its centre there is a statue of Haakon the Good standing with a sword. On its base, we find the etching of a cross and the following words: Med logum skal land byggja. This is old Norwegian With law shall the land be built.

Haakon the Good was the first Christian king of Norway. And as the statue suggests, he was greatly influential, not only in the Christianisation of Norway, but also in establishing the country’s laws.

According to the sagas, Haakon had quite an adventurous life. In our last episode (stage 86), we saw how his father, king Harald Fairhair triggered the Christianisation of the Norwegians rather unintentionally. We also saw that the evil intentions of one of Harald’s sons, ErikBlodøks (Bloodaxe), to kill all his brothers had compelled the king to send Haakon to England for safety. The English kingÆthelstan, who was a Christian, baptised and raised the boy in the faith.

When Harald Fairhair died in 933, Erik Blodøks became king of Norway, but his cruel rule greatly oppressed the Norwegians. In the meantime, Haakon was preparing to return to Norway and confront his brother Erik. King Æthelstan provided him with soldiers and the necessary equipment for the battles ahead.

Haakon and his fleet landed near modern-day Trondheim, 500 kilometres North from Fitjar. Soon he succeeded in securing the support of Norwegian landowners, or bønders, as he promised to release them from taxes that his father had set up during his reign. Less than a year after Haakon’s arrival, Erik Blodøks, who realised his impending defeat, fled to Denmark and then England, where he later died during a military campaign.

After two decades of a relatively peaceful reign, Haakon fought several battles against Erik’s sonswho sought to regain control. Then in 961, when his dominion seemed totally secured, king Haakon visited the island of Stord. There, a fleet led by another son of Erik attacked the king by surprise. Sadly, despite the victory of his army, Haakon was mortally wounded in battle and died soon after.

Haakon’s reign lasted a little over 25 years. But to return to the theme of this episode, how did Haakon influence the Christianisation of Norway?

As a devout Christian, Haakon influenced several of his subjects to adopt the Christian faith. He also built churches and brought priests from England to minister there. He even succeeded in securing the recognition of the Christian faith among each local thing (Parliament).

Despite such promising developments, Haakon wasn’t fully satisfied. Having been raised in a Christian kingdom, it is easy to imagine that he would have noted the superiority of the Christian laws in England in comparison to the pagan laws in Norway. Thus Haakon sought to convince the main parliament of the country at Frosta to adopt Christianity as the religion of the state.

Haakon’s appeal that the people should be baptised and embrace the Christian faith had a good reception at first. However, when he began to advocate for Christian laws such as instituting Sunday as a holiday, the parliament opposed it strongly. The idea that worshipping God should be more important than business was highly offensive to them.

After this turn of events the pagan priests realised that their faith was at stake in Norway. And so they tried to persuade the king to endorse paganism officially. Initially Haakon refused, but when his life seemed to be at risk, he conceded. Later on, Haakon repented for this and sought another favourable occasion to establish Christianity in Norway. Sadly the opportunity never came and Haakon died grieving over having endorsed the pagan faith.

Even though Haakon seemed to have failed, his influence was crucial for the future of Norway. A few centuries later, Christianity was, in fact, officially adopted. Norwegian laws were strongly shaped by Biblical standards and Sunday was indeed set apart as a day to focus on the most important things of life, that is worshipping God, resting and enjoying family.

Sadly, the idea of setting a day apart to worship God doesn’t appeal to our secularised societies anymore. But if a nation ceases to worship God, it will inevitably choose to worship something else, Mammon, for instance. This is why, I believe, there have been attempts to make Sunday a normal working day again in Norway. The consequences of this change would however be dramatic on both family and community life.

Haakon the Good understood that Christianity offered the best basis to build a strong nation. And it still offers such a basis for the future of Norway today.