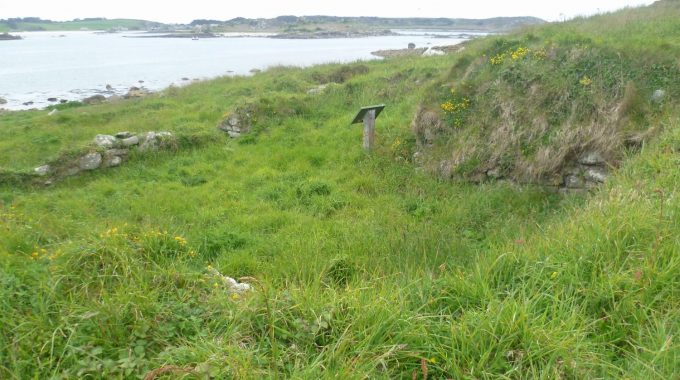 There is a little desert island off the coast of Cornwall which, quite amazingly, played a crucial role in the history of the distant lands of Norway.How was this possible?

The best way to discover the story of this connection is to visit this little island. It is called Enyd Elidius in Cornish but on most maps, you’ll find the English name St. Helen’s.

With an area of less than 0.2 square kilometres, Enyd Elidius is the eighth largest island of the archipelago of Scilly. It is a rocky island with a tiny beach in the South where small boats can dock. Even though the island is deserted at present, the ruins of an 18th century hospital for sailors in quarantine and of an 8th century hermitage both testify that Enyd Elidius was once inhabited. It is the ruins of this hermitage that we are going to visit today.

So, how could Elidius, a hermit who never visited Norway and probably lived most of his life on this small island, be involved in the Christianization of Norway? It is through a connection to an ancient king of Norway named Olaf Trygvasson. Before discussing the life of Elidius, let’s discover who this king was.

Establishing an accurate account of Olaf’s life can be challenging. Most of what we know about him comes from the sagas, and sometimes the accounts are contradictory.

As his last name suggest, Olaf Trygvasson was the son of Trygve and the great-grandson of Harald Fairhair, the father of the unification of Norway (stage 86). Since Trygve was a contender for the throne of Norway, Harald Greycloak murdered him in 963, shortly before the birth of Olaf. His mother, aware of the danger that loomed for her son, fled to her father’s house. There she gave birth to Olaf and, shortly after, she left Norway and sought safety in modern-day Western Russia, which was then under Viking rule.

When Olaf turned eighteen, he began a series of raids, first in Wendland (Northern Germany) and Denmark. Then after the death of his wife Geira, Olaf proceeded to Friesland (Northern Germany and Netherlands) and the British Isles. Olaf continued sailing down the Irish Sea, plundering the Hebrides in Scotland until he finally reached the Isles of Scilly in the South-West of Britain.

According to the sagas, Olaf had heard that a seer was living on this island. The seer mentioned in the sagas was very probably Elidius, also named Lide. In order to test if he really had the gift of prophecy, Olaf asked one of his men to go to Elidius and pretend to be Olaf himself. Elidius, however, was not fooled and thus Olaf was convinced of his gifts and paid him a visit.

When Olaf met Elidius, the hermit prophesied over him, saying:

Thou wilt become a renowned king, and do celebrated deeds. Many men wilt thou bring to faith and baptism, and both to thy own and others’ good; and that thou mayst have no doubt of the truth of this answer, listen to these tokens. When thou comest to thy ships many of thy people will conspire against thee, and then a battle will follow in which many of thy men will fall, and thou wilt be wounded almost to death, and carried upon a shield to thy ship; yet after seven days thou shalt be well of thy wounds, and immediately thou shalt let thyself be baptized.

The encounter was life-changing for him, so much so that instead of plundering the islandsOlaf stayed some time with Elidius who educated him in the Christian faith. After that, Olaf travelled to England where he made peace with king Æthelred II and was baptised by bishop Alphegeof Worcester.

But why did Elidius come to such an inhospitable place to start with?

Even though some sources mention that Elidius may have been a part of a Spanish heretical movement called Priscillianism, the ruins of the hermitage seem rather to suggest that he was probably a monk with Celtic Christian origins.

The Celtic church itself had resulted from the evangelization of Ireland by Patrick in the fifth century. Probably inspired by the Desert Fathers of Egypt, the Irish began to plant communities in which they lived in small huts. These communities focused on worshipping God. In later centuries, the monks began to travel outside Ireland and established similar communities in the British Isles, such as on this island, and in continental Europe.

The Celtic monks succeeded in evangelising the pagan tribes that had invaded Western Europe, such as the Germans and the Norse. Many times, they even reached important rulers. At a time when Christianity seemed on the verge of collapsing in Western Europe, we may wonder if it would have survived at all without the amazing influence that these Celtic missionaries had in Western Europe.

But what happened to Olaf Trygvasson after his baptism? After promising to the king of England that he would never attack his land anymore, Olaf began his journey back to Norway. And in our next stage we will discover, God willing, why Olaf came to be considered as the true founder of the Norwegian Church.