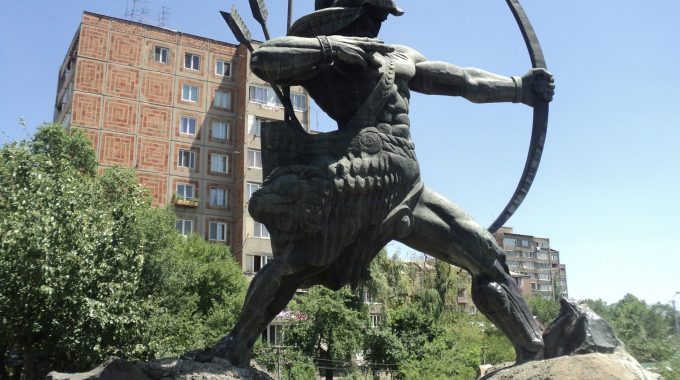 Along with Israel, Armenia probably shares the sad record of being among the world’s most persecuted nations throughout the centuries. And yet, against all odds, Armenia has succeeded in keeping its history and identity alive. Nevertheless, this didn’t simply happen by chance or even by human efforts.

To find out the main source for the preservation of the history and identity of Armenia, we will visit its capital, Yerevan.

Yerevan is situated 60 km from Mount Ararat, where Noah’s ark landed after the Flood. The city was founded in the 8th century BC and, as we can imagine, there is a lot to visit here. However, the place we are going to visit today is a park located in a suburb seven kilometres from the old town. The park is named after Fridtjof Nansen, a Norwegian man who rescued many Armenians from the terrible Armenian genocide organised by the Turkish government during World War I.

In the centre of the park, there is a bronze statue of a man drawing his bow, ready to shoot an arrow. This man was named Hayk the Great and he was the founder of the Armenian nation more than four thousand years ago. Whether or not the story is true, quite amazingly, the accounts related to his life have survived to this day. Here is what they say:

Hayk was the great-grandson of Japheth, and thus the great-great-grandson of Noah. He lived in Babylon (near modern-day Baghdad, in Iraq) when the tower of Babel was under construction. After God put an unexpected halt to the project by confusing the languages of the people, Hayk left Babylon and settled in the mountains of Armenia with his descendants, thus forming a first community of three hundred people.

Bel, the tyrannical ruler of Babylon, probably identified as Nimrod in the Bible, commanded Hayk to return to the city and surrender to him. The Armenian leader refused and, as a consequence, Bel set out to meet him with a huge army. Hayk, in contrast, had a very small troop. Nevertheless, they marched towards the Babylonian army and engaged in a battle near Lake Van, a region which is today under Turkish dominion. Against all odds, Hayk and his small troop defeated the mighty Babylonian army.

Bel and the survivors of the Babylonian army sought to escape. Hayk, however, didn’t relent. He pursued the Babylonian ruler until he caught and killed him. He then embalmed his body and finally buried him on a hill in Armenia so that all the successive generations would preserve the memory of Hayk’s victory. Naturally, Hayk became a hero for the nation and the statue in this park is proof that he is still remembered as such today.

Even if it is impossible to assert how truthful these accounts are, Armenia is nonetheless a nation that has succeeded in preserving its history since ancient times. How could this be possible? The main explanation that we can provide is simply through the early impact that the Bible has had in this nation.

After the Flood, God started a new humanity in the nearby region of Mount Ararat through Noah and his children. This could imply that Armenia is the most ancient nation of the world. Moreover, the Christian faith began to spread in the land very soon after the death and resurrection of the Lord Jesus Christ. Less than three centuries later, Armenia became the first kingdom to adopt Christianity as the only official faith, in 301.

Since Armenia was an official Christian kingdom, the court recognised the importance of teaching the Word of God to the whole nation. And so, a few decades after the official adoption of Christianity in Armenia, a monk named Mesrop Mashtots created a written alphabet and then translated the Bible into the Armenian language.

The creation of the Armenian alphabet and the translation of the Bible launched the development of several fields of knowledge that would prove to be crucial for the survival of the Armenian nation. For example, Koriun, one of Mashtots’ disciples, wrote the biography of his master The Life of Mashtots, and thus became the first author to write in Armenian. Movses Khorenatsi was another of Mashtots’ disciples who wrote the first book of Armenian history simply called History of Armenia. To this day Khorenatsi is remembered as the Father of Armenian history.

The events that I have mentioned above were vital for the future of Armenia. Knowing the Word of God generated the creation of the Armenian alphabet, the development of Armenian literature and of its recorded history, all of which became crucial for the survival of the nation.

In later centuries, the kingdom of Armenia lost its independence and was incorporated successively into the Iranian Empire, the Ottoman Empire, the Russian Empire and finally the Soviet Union. However, neither the centuries of Islamic rule nor the atheistic Communist religion in the twentieth century could uproot the Christian faith from Armenia.

The preservation of the identity and the history of Armenia didn’t happen by chance. It is a fruit of the amazing impact that the Gospel has had among the Armenian people.