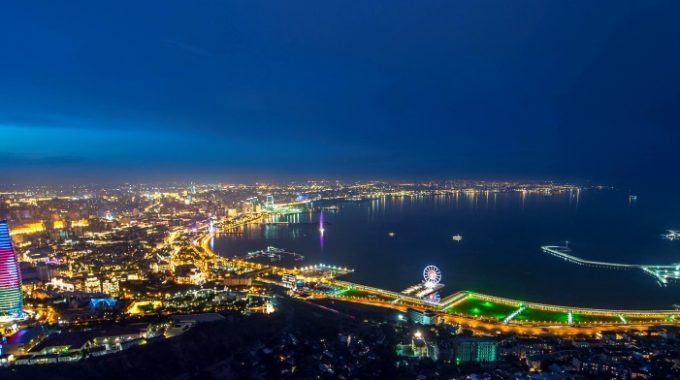 Azerbaijan is a predominantly Muslim nation nowadays. But even though this is an undisputed fact, a closer look into the history of this land reveals that before the Muslim invasions, a flourishing church once existed here.

The neighbouring nations of Georgia and Armenia are known to be among the oldest Christian lands in the world, but the Gospel also arrived in present-day Azerbaijan at an early stage of history. To discover more about the spread of the Gospel there, we will visit the current capital of the country, Baku.

Thanks to its strategic location at the shores of the Caspian Sea, Baku has become an important economic hub in this part of the world, especially since the fall of the Soviet Union at the end of the twentieth century.

The Maiden Tower is one of the most emblematic sights that we can visit in Baku. There is a lot of mystery surrounding the history of this tower: although it dates back to the 12th century, when the region was already Islamised, some recent studies seem to indicate that this tower used to be a Zoroastrian temple.

In addition to this, just a few metres behind the tower, there are ruins of what used to be a chapel. Even though they seem to suggest that this was an ancient church building, they are actually the ruins of a Russian Orthodox chapel named after St. Bartholomew, which was built in 1892 and destroyed but a few decades later by the communists in 1936.

The fact that a Russian Orthodox chapel was built in this predominantly Muslim city is not surprising, as Azerbaijan was under Russian rule in the 19th century. However, this site may also be a witness to an important event in history that goes back to a much earlier time. It is actually believed that the apostle Bartholomew was martyred here in 71 AD.

The accounts regarding the life of Bartholomew have been disputed even to this day. The Bible doesn’t illuminate us with much information either, as it mentions Bartholomew only four times, and in each case, it is only in the list of the Twelve Apostles. As for the information we can gather from extra-biblical sources, they are sometimes contradictory. So, before we look at the influence Bartholomew’s name has had over the early church in this land, let’s first try to retrace his life as best as we can.

Just before ascending to heaven, Jesus commanded his apostles to go and make disciples of all nations (Matthew 28:19). The apostles thus went in all directions to preach the Gospel. Both Eusebius of Caesarea and Jerome wrote that Bartholomew travelled to India. However, other accounts claim that he preached the Gospel in the ancient kingdom of Armenia (stage 92) and also in the neighbouring lands of the Caucasian mountains, including the area of Baku, which was then under Parthian rule.

The story of Bartholomew’s martyrdom is linked with the Parthian ruler Sanatruk. Already earlier on, some accounts related that the apostle Thaddeus preached the Gospel to Sanatruk’s court and as a result, several officials became Christians, including Sanatruk’s daughter Sandokht. This greatly displeased Sanatruk who thus killed both Thaddeus and his own daughter. Later on, Bartholomew arrived to preach the Gospel to the royal court. This againled to the conversion of officials, and even of Sanatruk’s sister Thakouhi. This time Sanatruk sentenced Bartholomew to death and the apostle was crucified upside down.

Bartholomew’s martyrdom took place in a city called Albanopolis. The exact location of this city has been disputed, between Derbent in Dagestan, Başkale in modern-day Turkey and Kaylan in India. However, the most likely candidate is apparently Baku and the exact location of his martyrdom was probably here, behind the Maiden Tower.

Whether these accounts are correct or not, what is undisputable is that several missionaries preached the Gospel in the Caucasian lands, often at the cost of their lives. Nevertheless, their work produced fruit and in the following centuries, there were strong churches in this area, including in Azerbaijan, which was then called (Caucasian) Albania. One of the consequences of the Christianisation of this land was the creation of the Udi alphabet so that the people could read the Bible in their own language.

Nowadays, Armenia or Georgia are still predominantly Christian countries and they still speak their ancient language. However, the church in Azerbaijan is marginalised and the Udi language has almost disappeared. Whatever happened?

Sadly, the Council of Chalcedon in 381 had caused a deep division between the church of Armenia and the church of Caucasian Albania. As a consequence, the Albanian church became isolated. Soon after, foreign Muslim armies took advantage of the situation and succeeded in conquering the land, sadly also in collusion with Armenian church leaders (stage 6).

Contrary to the sacrificial spirit with which earlier missionaries had preached the Gospel, the Muslims destroyed the church and established their faith in the land by military means. Caucasian Albania, later renamed Azerbaijan, has remained predominantly Muslim ever since.

Just before commanding his apostles to make disciples of all nations, Jesus affirmed that all authority in heaven and on earth had been given to him. Jesus still has authority over the whole earth, including Azerbaijan, and He can still resurrect a strong church for himself in this land.